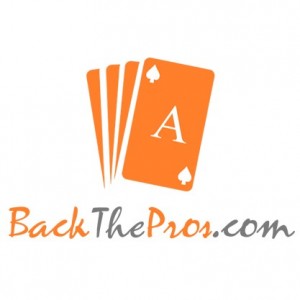 BackThePros.com is a trading platform for online poker backing.
Backers can 'Back a Pro' for online poker tournaments through our platform automating the whole process and with the click of a button.
Backers are able trade their positions at anytime to other Backers, allowing them to enter and exit positions quickly and efficiently.

Monetisation strategy
Our main source of revenue is to take a percentage of backings done through our platform. For example, if someone backs a poker player into a tournament of $20 we will charge $2. We can do this because we provide the security and automation that otherwise wouldn't exist.

- Poker has experienced a super-sonic boom over the last decade and has become a phenomenon.

- Online poker has become an industry in itself and the game is played by over 300 million people around the world, China is an emerging market and accounts for around 20% of new players.

- The largest poker site in the world PokerStars was acquired by a Canadian company for $4.9 billion.

- Online Poker is played in almost every country in the world and televised events attract an impressive audience.

- The largest 'live' poker tournament is called The world series of Poker, and attracts around 6000 players paying $10,000 each with a first place prize of around $8,000,000, the largest prize in any form of sporting event.

- The poker industry has proven to be recession proof thriving through both the dotcom crash and 2008 crash.

Product developer and visionary entrepreneur. A perfectionist who takes this company and brand very seriously; working and re-working on every detail until it meets my high standards. Confident that with my industry knowledge, ambition, vision and attention to detail I can turn this company into a household name.

We’re building this company with the intentions of an eventual trade sale, and believe large companies such as PokerStars or PartyPoker would have the greatest interest in acquiring us due to their buying trends and our estimated level of users in the next few years.